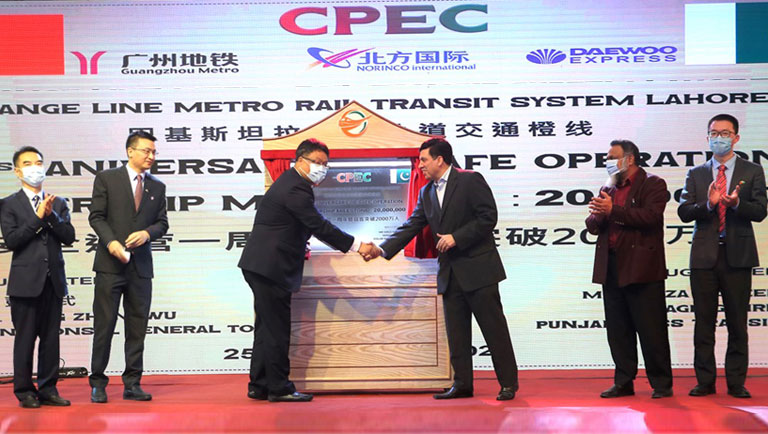 A ceremony to commemorate the first anniversary of Orange Line Metro Rail Train System (OLMRTS) operations was held on October 25, 2021, at the project’s Head Office. The event also marked the achievement of surpassing the milestone of 20 million passengers who preferred boarding the Orange Line trains in the course of the year, to enjoy reduced traveling time from Dera Gujran to Ali Town by 105 minutes. Orange Line Metro Train Marks Its 1st Anniversary.

Chinese Acting Consul General, H.E. Mr. Peng Zhengwu and Managing Director Punjab Mass transit Authority, Mr. Mirza Naseer Inayat graced the occasion as chief guests, while top management of the OLMRTS project was also present at the event to pay homage to the Government of Pakistan for its unrelenting support, and to the project members for ensuring the provision of world-class service with flawless operational excellence.

Despite frequent lockdowns due to the pandemic, the project’s impressive growth in ridership was attributed to the persistent efforts to provide safety, security, cleanliness, reliability and comfort for the commuters. The hi-tech trains, operating daily from 6 am to 10 pm with a gap of up to 5 minutes from Ali Town to Dera Gujran through 26 stations have brought incredible convenience to the residents of Lahore and led a new momentum in the development of urban modernization.

In addition to creating more than 2,000 local jobs through the O&M joint venture, the project has also helped ease traffic and air pollution by becoming the preferred choice of travelers to reach their destinations.