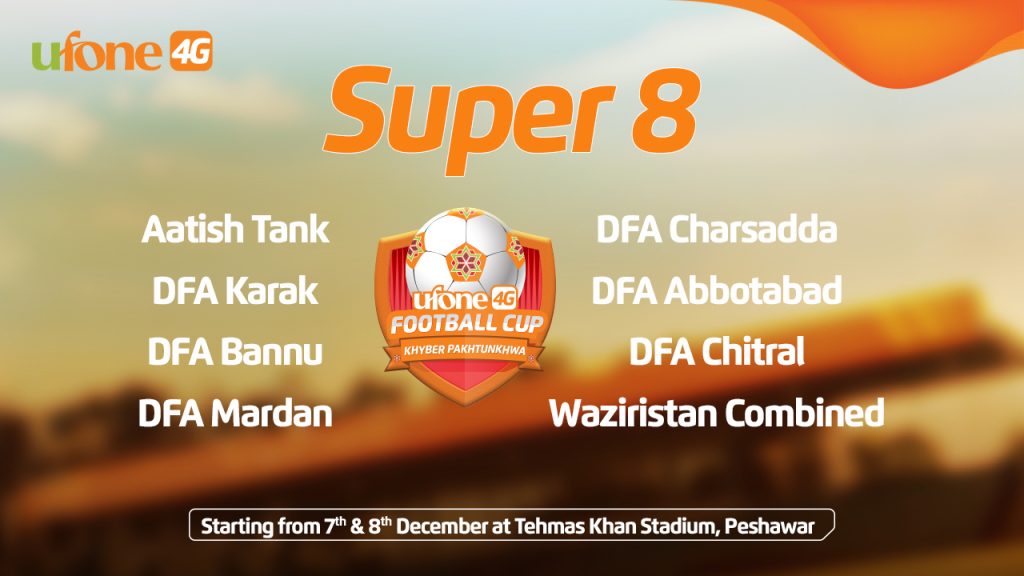 Following the successful completion of Ufone 4G Balochistan Football Cup 2021 in Quetta, the Khyber Pakhtunkhwa (KP) leg of the tournament has also reached the sensational Super 8 round. The winner of the Khyber Pakhtunkhwa leg of the tournament will meet Balochistan edition winner Muslim Club Chaman in a Super Final match in Peshawar on 12th December.

After the completion of the Eliminator round, DFA Charsadda, DFA Abbottabad, Aatish Tank, DFA Chitral, DFA Karak, DFA Mardan, DFA Bannu and Waziristan Combined have qualified for the Super 8 level, which will be played on 7th and 8th December, two matches a day. All the Super 8 and Semi-Final matches will be played at the iconic Tehmas Khan Stadium in Peshawar. On 7th December, DFA Charsadda will face DFA Abbottabad while DFA Tank will play DFA Chitral. The next day, DFA Karak will fight it out against DFA Mardan while DFA Bannu will be pitted against Waziristan Combined.

The Semi-Final matches will follow on 10 December at Tehmas Khan Football Stadium Peshawar, for the coveted slot in the finals at 2:30 PM and 5:30 PM respectively. The Final match will be played on 11 December at 5:30 PM at Tehmas Khan Football Stadium. The winner of the Khyber Pakhtunkhwa title will then face Muslim Club Chaman, the winner of the Balochistan leg of the tournament to decide the ultimate Champion of the Ufone 4G Football Cup 2021 in the Super Final at 5.30 PM on 12 December.

The Semi-Finals, Final and Super Final matches will be broadcast live from PTV Sports and social media channels of Ufone 4G. The Ufone 4G Football Cup is a unique sports event that empowers youth by helping marry talent with opportunity. The platform has been instrumental in finding valuable talent that has represented Pakistan at the global level to project a soft image of the country. The event also serves to motivate youth to take up sports for a hearty lifestyle, besides creating massive economic activity for the local communities and the country at large.