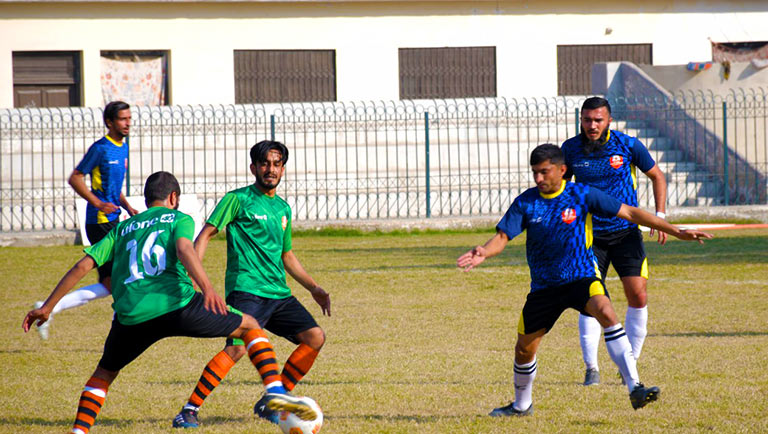 DFA Mardan and Waziristan Combined have registered decisive victories against their opponents DFA Karak and DFA Bannu respectively to complete the Semi-Finals lineup of the ongoing Ufone 4G Football Cup Khyber Pakhtunkhwa at Peshawar’s Tehmas Khan Stadium. DFA Charsadda and DFA Chitral have already made it to the Semi-Final round of the tournament. DFA Mardan & Waziristan Combined book berths in Semi-Finals.

On Thursday, DFA Karak faced DFA Mardan while DFA Bannu played Waziristan Combined for the coveted Semi-Final slots. The match between DFA Mardan and DFA Karak remained a sensational spectacle for football enthusiasts present at the venue to catch the action live. The contest witnessed a shift of equilibrium in the 15th minute when Zahoor Khan from DFA Mardan scored the first goal. DFA Karak failed to shake Mardan’s strong defensive line up which continued to dominate the contest thereon. DFA Mardan’s Mahab scored the second and decisive goal in the 70th minute to put his team through to Semi-Finals by 2-0.

The Semi-Finals will be played on 10th December at Tehmas Khan Football Stadium Peshawar,  where DFA Charsadda will fight it out against DFA Mardan at 03:00 PM while DFA Chitral will face off against Waziristan Combined at 05:30 PM under floodlights. The winner will meet at the Final match will be played on 11th December to decide the winner of the Ufone 4G Football Cup Khyber Pakhtunkhwa.

The winner of the Ufone 4G Football Cup Khyber Pakhtunkhwa will then face Muslim Club Chaman, the winners of the Balochistan leg of the cup in a Super Final match, the grand finale being played on 12th December at Tehmas Khan Football Stadium Peshawar under floodlights. The winner will be the ultimate Champion of Ufone 4G Football Cup 2021. The Semi-Finals, Final and Super Final matches will be broadcast live on PTV Sports and the official social media channels of Ufone 4G.