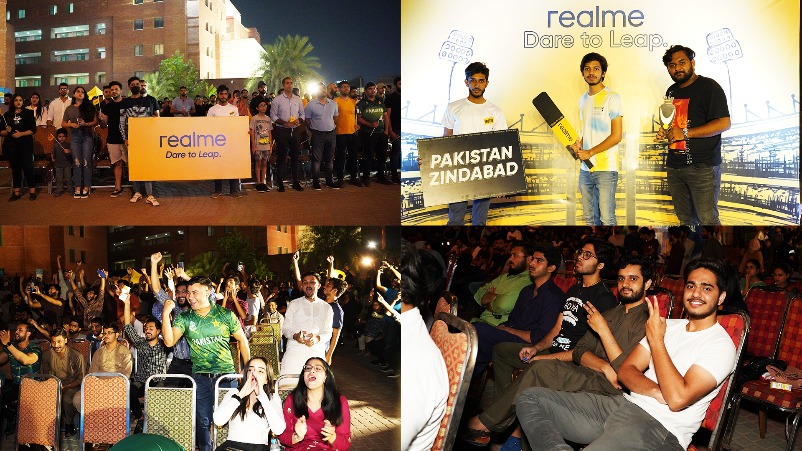 In Support of Flood Victims, realme screened the Finale of Asia Cup 2022 at UCP Lahore

realme has always maintained its position of being a youth-centric brand. For this reason, the smartphone brand strives to bring engaging events to the Pakistani landscape that cater to youthful interests such as music, technology, and sports. In the month of August, realme brought a unique sporting event for the youth with the realme Mega Azadi Ride and with that promised to bring more sporting events for its fans in the future. realme, being in tune with what the youth wants, partnered with Khiladee to bring an exclusive screening of the Asia Cup 2022 finale match to students of University of Central Punjab (UCP). The proceeds from the entire event were donated for the rehabilitation of flood victims in Pakistan.

Having a history of working with realme previously, the campus has also been host to the PUBGM realme Gaming Championship 2022 while also being the launchpad of the realme C3 and realme 5i. Khiladee is Pakistan’s first sports tech startup with the mission of uplifting Pakistan and its image through the realm of sports, bringing the country together under the umbrella of camaraderie and sportsmanship. After a checkered match history during the Asia Cup 2022, the Pakistani team stepped up to the plate to face the Sri Lankan team in the finals this past Sunday, October 11, 2022. The stakes were higher than ever as the winning team would walk away with the trophy and title of the entire championship.

The UCP student body turned up in full force to witness the outcome of this nail biter of a match with around 700 – 1000 people in the crowds cheering Pakistan on through the ups and downs of the final match. Students gathered in the open courtyard where setup was done by the realme team to create the vibe to enjoy the final match. A photo wall set up by realme provided an opportunity for students to strike fun poses with props such as a bat, a trophy, and a sign supporting the Pakistani team, to hype themselves up for the night’s sporting event. A screen was set up outside where the match was to be broadcast interspersed with ads of realme products in the breaks.

The crowd roared and gasped with every big hit, catch, run, and wicket in the tight T20 match. Commentary went along with the match, provided by UCP student representative, Zurgham Hussain. To keep the crowd hyped throughout the match, a quiz was also conducted of realme and cricket trivia which gave the crowd a chance to win exciting realme giveaways. The students enthusiastically participated in the session and a lucky few walked away with exciting realme merchandize. The green shirts signed by star players of Pakistan’s men and women Cricket Teams were also auctioned at the event to collect funds for flood affectees.

As the tables turned in the final match, the crowd remained spirited and hopeful that Pakistan would pull through. The energy in the air was charged with the spirit of camaraderie and unity as the students of UCP anxiously awaited the final over and the outcome of the tournament. While Pakistan may have not taken the Asia Cup trophy home at the end of the night, the UCP student body still left the venue with a warm feeling of community. Cheering alongside each other and experiencing the dynamic nature of professional cricket together through the generosity of realme and Khiladee was a bonding experience like few others.