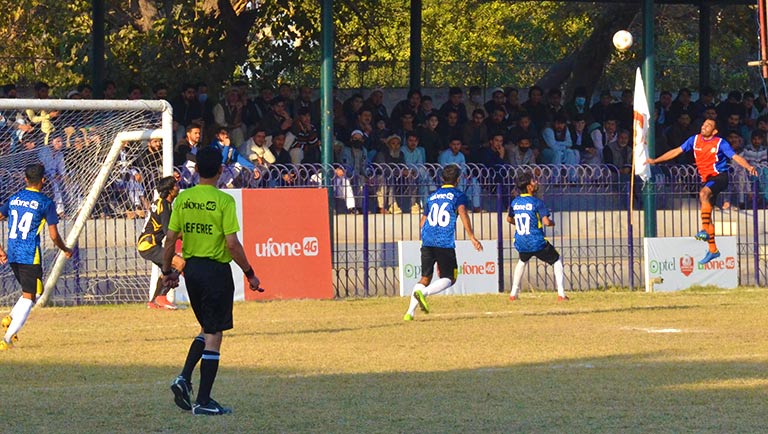 Mardan & Chitral Make it to the Final

Football teams of Mardan and Chitral made it to the final of Ufone 4G Football Cup Khyber Pakhtunkhwa here in Tehmas Khan Football Stadium Peshawar on Friday by registering emphatic wins against their opponent teams. Over 71 teams participated from across the region in the Khyber Pakhuntwa leg of the tournament, played simultaneously with its Balochistan edition. Mardan & Chitral Make it to the Final.

The first Semi-Final match was played between DFA Charsadda and DFA Mardan at Tehmas Khan Football Stadium on Friday. Despite repeated attacks on both sides, no goal could be scored during the allocated time. Some of the shots were near misses but defenses outweighed offensive tactics on both sides and the match was ultimately decided on penalties.  This stage of the contest was however dominated by DFA Mardan, which took away the match 4 against 2 to book its slot in the Final.

The second match was played between DFA Chitral and Waziristan Combined under floodlights at a packed Tehmas Khan Football Stadium. The two teams appeared to be in impeccable touch however, Chitral was tipped as favorites for its extensive collective experience and history as the Runner up of the 1st edition of Ufone 4G Football Cup.

DFA Chitral dominated the match from the beginning through maximum possession of the ball as well as by launching fierce attacks at regular intervals. In the 18th minute, DFA Chitral’s Muhammad Rasul sent the ball wheezing past the Waziristan goalkeeper to put his team in command. Chitral’s dominance was further solidified by Ziaul Islam who added the second goal in 24 minutes into the match. Waziristan Combined took its time to respond. It started the second half on a triumphant note when Faheemullah scored the 1st goal for his team in the 50th minute. The rest of the match remained an active contest on both sides, with Chitral seeking to reinforce its dominance while Waziristan looking to equalize the scores.  The day was however carried by DFA Chitral when its player Ziaul Islam scored a sensational long-range goal, his second,  in the 93rd minute, labeled as the ‘goal of the tournament’ by commentators, propelling his team into the Finals by 3-1. Mardan & Chitral Make it to the Final.

In addition to the memorable performances on the field, the Semi-Final matches also featured cultural performances and music to entertain the crowd. The Final match will be played on 11th December between DFA Mardan and DFA Chitral to decide the winner of the Ufone 4G Football Cup Khyber Pakhtunkhwa. The winner of the Ufone 4G Football Cup Khyber Pakhtunkhwa will then face Muslim Club Chaman, the winners of the Balochistan leg of the cup in a Super Final match, the grand finale being played on 12th December at Tehmas Khan Football Stadium Peshawar under floodlights. The winner will be the ultimate Champion of Ufone 4G Football Cup 2021. The Semi-Finals, Final and Super Final matches will be broadcast live on PTV Sports, ProPakistani and the official social media channels of Ufone 4G.